Members homes in Kadina, Moonta and Wallaroo were the meeting venues until 1979 when branch meetings were held at the National Trust old school room in Maitland.

In September 1988, Lady Dunstan, wife of the Governor, unveiled an embroidered mural depicting Yorke Peninsula. The 3.5m X 2.6m mural was designed and worked by the Branch members, and now hangs in the Maitland Town Hall.

In 2010 the branch celebrated their 40th birthday. Former members, members of the Embroiderers’ Guild of South Australia executive
and current members celebrated at a birthday lunch. One of the first members, Marie Holliday, is still a member of the branch.

The 16 current members live in, or, near the towns of Maitland, Ardrossan, Balgowan, Black Point, Edithburgh, Brentwood, Hardwicke Bay, Point Turton and The Pines.

As well as the Embroiderers’ Guild of South Australia Inc. membership fee, there is a small annual branch subscription to cover any costs. A yearly calendar which includes meeting dates, workshops, & classes is planned at the beginning of the year, and, a branch newsletter ‘Needle In a Haystack’ which is published quarterly, is provided to all members.

Meetings are held on the 1st and 3rd Monday of each month from 10.00am – 3.00pm in the Ardrossan Meals on Wheels Meeting Room.

On the 3rd Monday, members who are studying the Basics to Beyond to receive their instruction. This is also a stitching day for all members.

Yorke Peninsula is west of Adelaide, and has the distinctive shape of a leg and foot. There is about 700 kilometers of coastline around the peninsula. Gulf St. Vincent is on the eastern side and Spencer Gulf is on the western side.

Many of the historic towns along the coast have jetties which were built to transport grain by ship.

Today, as well as farming, fishing and tourism are the most important industries of Yorke Peninsula. 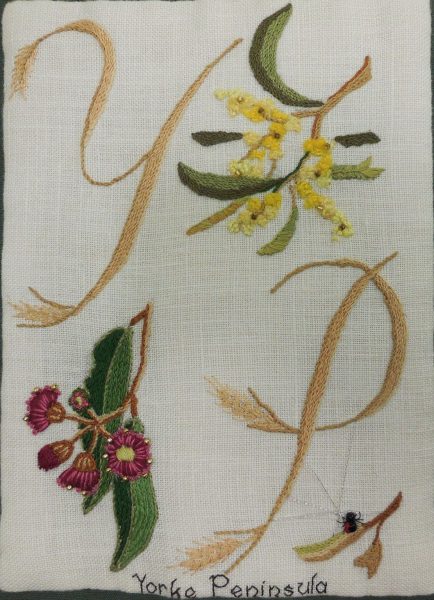